Hi Sandra, I have a question for you. I am seeing a 6 year old girl who has Smith Magenis Syndrome. She has cognitive delays and speech is “mushy” sounding due to a tongue that is moving incorrectly. Her orthodontist is starting on his work and referred her to me for tongue thrust issue. She has a prognathic jaw that he is beginning to address. This little girl is a delight. We have been moving very slowly through the orofacial myology exercises to work on better tongue control and tongue/jaw differentiation movements….. I see her only one – two times per month since she needs more time to practice and accomplish the movement patterns at home with mom. We have been progressing along just fine until we hit the tongue /jaw differentiation movements that require speech production!!! She can produce “la” and “na” with the prop with her tongue tip, but can not produce “ta” and “da” with prop with tongue tip, instead she uses her mid tongue (which is her movement pattern in spontaneous speech). We have been trying to get this for the past two months (two sessions). I appreciate how important this movement pattern is, so I can’t just say “oh well lets move on”. I did tell mom that we may need to take a break from therapy until she matures, but I told her I would seek your advice first. I would love your thoughts!!! The weather is beautiful and nippy, but with a sky full of sun! My best, B

Hi B, Great to hear from you.  If she is indeed making the L and N the correct way, then she can also do the T and D.  Are you using the 3Way Mouth Prop for the L and N also?  If not, I would be very suspicious if it is being done correctly since T and D are not following suit. For the T, be sure that there is absolutely no voicing, no vowel after the /t/ sound.  I suggest getting a small post-it sticky paper and placing it on your index finger.  If you are producing a clear sharp voiceless /t/ sound, then the paper will flap when in front of your mouth.  Use it first with your finger and her sound production and later you can place in on her own finger.  Do not have her repeat it several times in a row, but rather have her hold her tongue tip to spot for a second or more before “exploding” once with the /t/ release.  Do this one at a time.  Be sure that the mouth prop is adjusted so that it is not too wide for her tongue to comfortably reach the incisive papilla (spot) and not to small an opening so that she can accidentally continue to use the blade…we want only the tip involved.  Since she CAN do the N and L, I would also try to work using them.  For example, have her produce on /n/ sharply. Work from there to make it a “silent” but airy /n/….which in reality IS the /t/ sound.  One last thought.  Depending upon the severity of her prognathism, it might actually be difficult for her tongue to go where you are asking her to place it.  Be sure that that is not a consideration. Hope this helps and hope you come see me in Orlando! Sandra 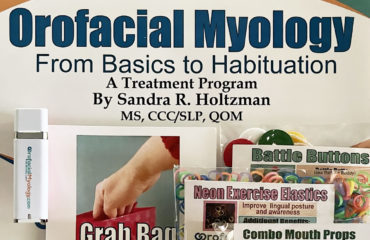 One Myo Kit or Mega Kit for all myo patients

How to restart sucking program?