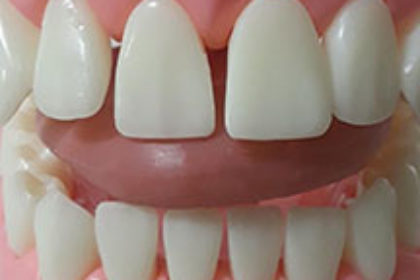 When I evaluated her, she did not have any tethered oral tissue but did have a slight dentalized somewhat distorted s/z on some words.  She also appeared to have a narrow maxillary and high vaulted arch, although she had a normal Class One occlusion.  What was of concern to me was her jaw thrusting forward when she produced a word with /sh/.  She indicated that she has TMJ and that she had a mouthguard for the condition, but that it keeps falling out.

I am concerned about the relationship between a jaw thrusting forward and TMJ.  Is it likely that the forward thrusting of the jaw is pulling her tongue with it, distorting her /s/ and /z/ production at times?  I did post this question on Myo Masters and it was suggested that she be sent to a TMJ specialist; two others suggested that she should be referred for a sleep study (as she could be subconsciously removing the guard in her sleep due to airway issues).  I did not palpitate or squeeze her masseters due to her reported TMJ.

I would greatly appreciate your help and insight with this.

Adults are certainly more complicated, aren’t they?  Some of my thoughts:

Did the lisp really go away at one time?  Or did she learn to compensate for it by shifting her jaw and other facial/oral odds movements?

Did the removal of the tonsils help a bit and make the parent think it solved the lisping problem?  Any current history of allergies or other congestion?

Can she suction and fit her tongue within her palate with the mouth open for you to see?  If not, then that could contribute to having to move the jaw in order to get the sounds to be released the best possible way under those circumstances.  With a narrow palate, the tongue would be held over the teeth to produce some sibilants, for example.

So those are some questions I’d pose, but where to go from here?

1.  Check if the jaw moves only for certain sounds and determine for sure which ones.  Sounds like it’s s,z,ch,sh,zh,and j(“judge”).  Any other times?

2.   Determine her ability to suction her tongue within her palate;

Determine her ability to maintain that suction.

Determine if the mandible is lopsided during suction with open mouth and if so, her ability to control that asymmetry.

3.   Get more info why she got the TMJ mouth guard appliance, what were the reasons, is/does she have pain associated with it? (If so you have to be extra cautious with certain exercises assignments).  Have her describe why she thinks the appliance is falling out.

You have to know whether the jaw deviation is causing the speech problem or vice versa.

Frequently it is the speech that is causing the jaw to have to move in an unnatural manner in order to produce the sounds correctly in connected speech.  That is why it is important to rule out structural reasons such as a narrow palate that won’t allow for the tongue to fit within it, thus compromising speech.

I hope this is helpful.

Here is my update on this perplexing client (the adult with TMJ and dentalized s/z production).  I saw her again on Thursday–she was able to suction and swallow with mouth open.  She chews mostly on the left, as the pain is worse on the right side and in fact, pops on the right.  She told me that she is in pain “all the time.”  When producing various phonemes, her jaw shifts to one side or another, including light deviation to the right on /sh/F; slight deviation to the left on /ch/–her jaw also came forward on some other phonemes.

I am going to recommend that she see a TMJ specialist; therapy should commence after the TMJ issue is resolved or at least addressed.  I’m just not sure where to go after that–myo or articulation?  I don’t really know what myo to do for jaw thrusting due to TMJ.  I would greatly appreciate any suggestions.

Thank you so much.

NHS: Hi J, you will have a better idea once you know what the situation is regarding her TMJ. With all articulation, you have to begin with the myo portion to ascertain that the muscles are all working up to the maximum function.  Then you insert speech training based on where they are in treatment. For example, frontal lisps may be initiated after proficiency exam number one or if you want to be even more certain, after phase 1. If there’s lateralization or the sounds CH or SH  are involved, then you want to complete the section on suctioning in phase 2 prior to beginning to work on those sounds. For R,  proficiency exam number one is usually adequate but much of the time with R it is related to a structural issue such as a restricted lingual frenum or an unusually high or narrow hard palate.

Thank you so much.  This was very helpful.

What do you tell the patient and family after taking the intensive course?